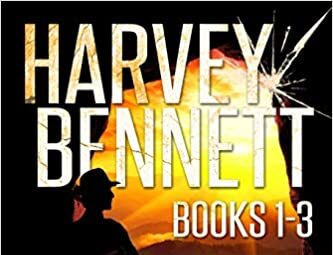 The Enigma Strain. The Amazon Code. The Ice Chasm

I read these books back to back a couple months ago, so I’m going to review them all together. The story lines are closely tied together, so that helps.

Harvey Bennet is a quiet park ranger until a bomb goes off in Yellowstone National Park. Suddenly people are dying from an unknown virus. Bennett must team up with a CDC investigator, Juliette Richardson, to unravel the puzzle before the next bomb goes off.

A secret is hidden deep in the Amazon. Harvey Bennett has no idea what it is. But he does know one thing – the organization that tried to kill him and half the nation at Yellowstone wants it. And Harvey will do just about anything to get it first. Bennett and his new girlfriend Juliette team up with an unlikely crew in a desperate search for El Dorado.

From the Amazon to Alaska. Bennett and Juliette are now living as far away from civilization as they can get. But it’s not far enough. An old friend pulls them into a deadly mission to take down Draconis Industries once and for all. Funded by a mysterious backer and accompanied by a larger crew, they head to Antarctica. Ice storms, a contingent of Chinese soldiers, and a rather sentient AI threaten to kill them before they can discover the truth hidden deep in the ice.

Thacker is a master at weaving fast-paced action with the thrill of chasing long-lost relics. We’re pulled into the story and propelled across the globe alongside our heroes.

Harvey Bennett is just an ordinary guy, but he’s determined to stand up for what’s right. He’s not about to step aside and let Draconis Industries take over the world.

Juliette Richardson is quiet and intelligent, but she is equally bent on taking out Draconis Industries after they caused the death of several of her colleagues. She and Harvey make a good team, each bringing different strengths to the pursuit.

These books were a great escape. Like most in the genre, a certain suspension of disbelief is needed. But the point of escape fiction is to leave reality behind, so it’s to be expected.

Thacker did hit one of my pet peeves though, and clearly, I’m struggling to move on. The characters are outside in subzero temperatures, in blizzards, often without proper gear. And it never seems to bother them. Not even frostbite! *deep breathe* It’s fine.

I do wish there had been a little less introspection and a little more action, especially in the middle of firefights. But they get the job done, and the bad guys suffer.

These books were great fun, and I’m looking forward to reading more in this series.